Central Asia Barometer has been operating in areas of research, analytics and dialogue over the past ten years.

Recently, Central Asia Barometer presented on its special online event the first results of the ongoing research project «United Central Asia. Obstacles, Opportunities, Prospects” in Partnership with the Rosa-Luxemburg-Stiftung Central Asia that is an attempt to fulfill the informational gap and answer some questions such as:

It aims to identify obstacles, factors, and opportunities for improving cooperation and rapprochement between Central Asian countries through the prism of opinions and perceptions of citizens and experts in the region.

To the date, our target group for survey have been population and expert community in Kazakhstan & Uzbekistan.

Experts in the fields of:

At the moment fieldwork in Kazakhstan and Uzbekistan was finalized and CAB is processing and analyzing the data. In 2022, fieldwork will be conducted in Kyrgyzstan and Tajikistan. The project's first phase data including questionnaires, methods reports, analytical reports, transcripts, and datasets will be accessible to the public on our website within November 2021.

In order to learn what Kazakhstanis and Uzbekistanis think of commonalities in Central Asia we asked several questions on next topics.

In your opinion, what is common between the countries of Central Asia?

“I don’t know what is common between countries of Central Asia”:

of Kazakhstanis, who shared their opinion, used answers, which included the word “Turkic” meaning that Turkic languages, culture and traditions are ones that are common for all Central Asian countries. 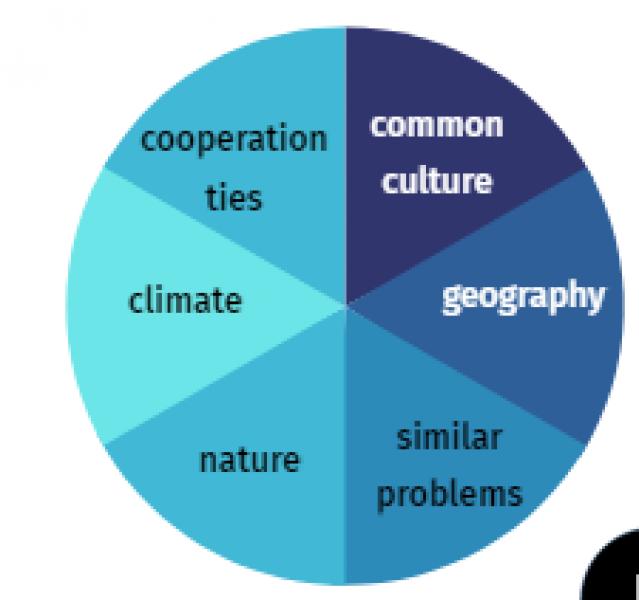 The respondents from two countries also named these things that are common. 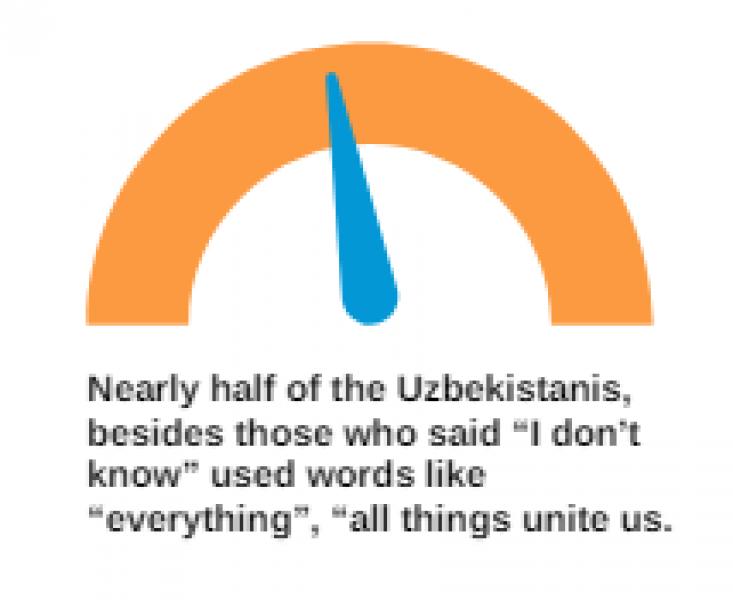 Nearly half of the Uzbekistanis, besides those who said “I don’t know” used words like “everything”, “all things unite us.

In your opinion, why should people from other countries of the world consider visiting Central Asia at least once in their life?

Respondents from Kazakhstan and Uzbekistan believe that Central Asia should be visited for these reasons.

One of the goals of the project was to learn Central Asian attitudes towards regional integration. In order to do this, we asked them several questions:

In your opinion, should the Central Asian countries unite and integrate further or should each country go on its own way?

The similar majority of respondents in Kazakhstan and in Uzbekistan responded that the Central Asian countries should "unite more".

Others in Kazakhstan and Uzbekistan believe that the countries should develop and go in their own separate ways.

Should CA countries unite into a regional political and economic union to further develop and solve problems?

The data clearly shows that overwhelming majorities in Kazakhstan and slightly more people in Uzbekistan look positively to the prospects of regional integration.

Minorities in Kazakhstan and Uzbekistan believe that such union is unnecessary. 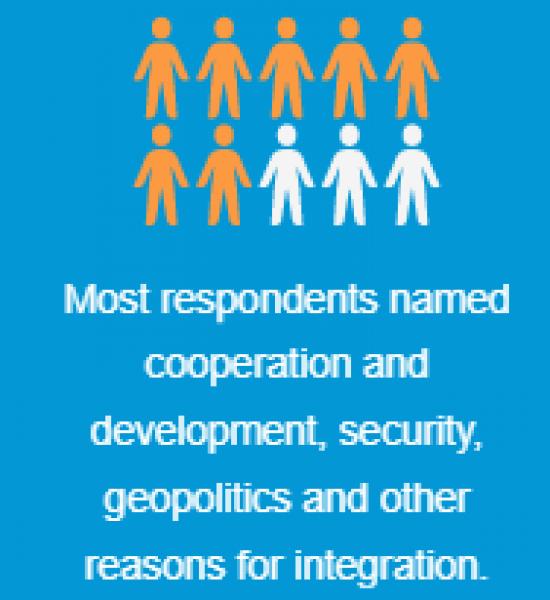 The majority of Uzbekistan residents associate their future with Central Asia as a whole, only 9% of respondents plan to leave.

Speaking of Kazakhstan, 20% fewer want to stay in Central Asia than in Uzbekistan, almost a quarter of those surveyed would like to leave.

Can our country prosper if it unites in an economic and political alliance with other Central Asian countries? 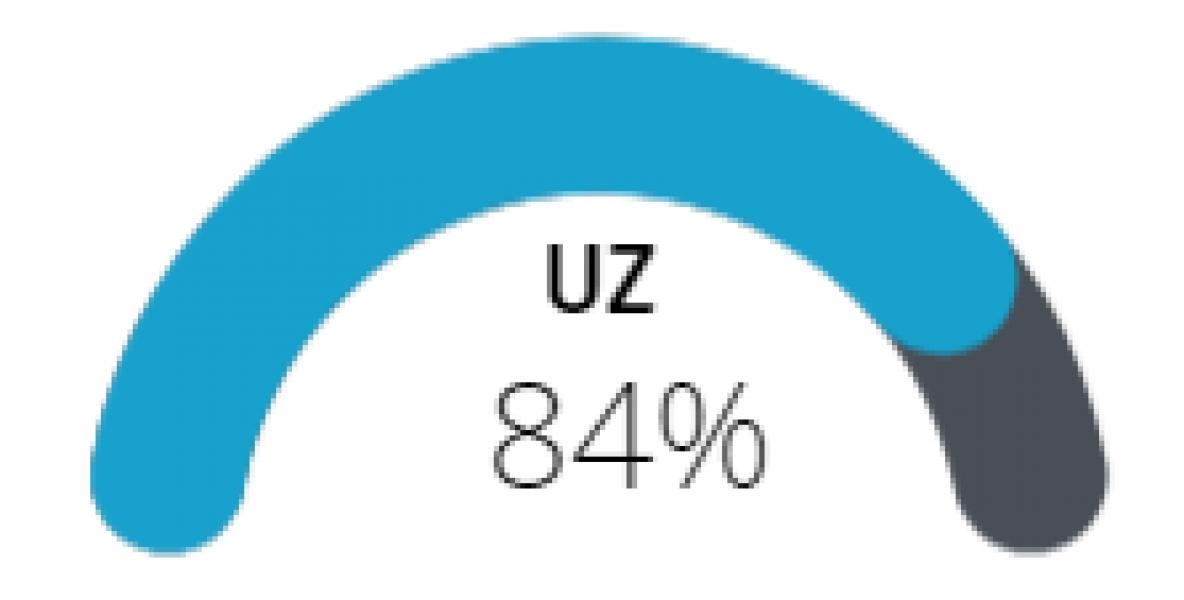 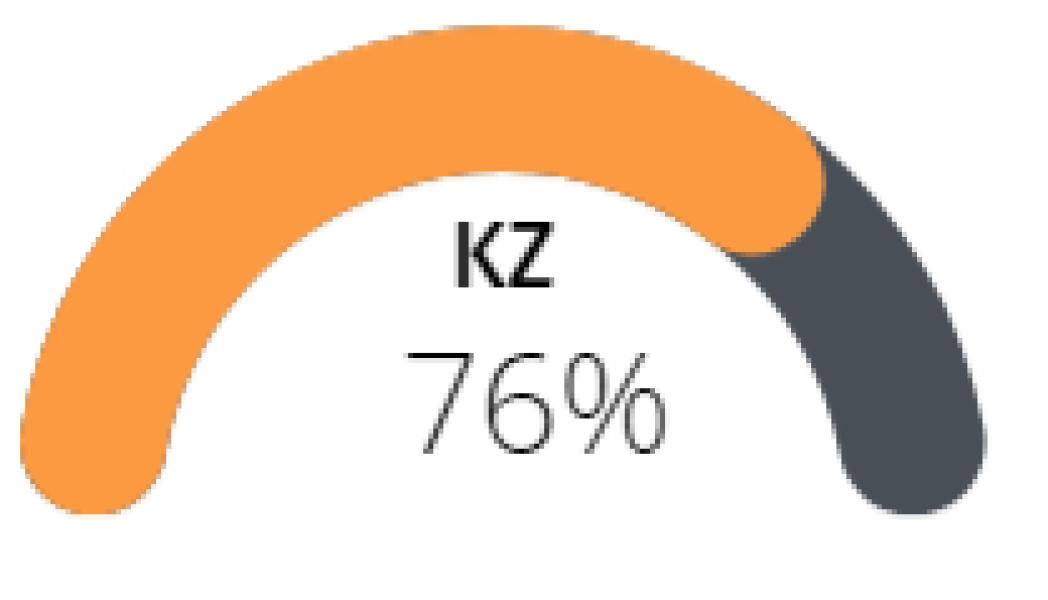 Majorities in UZB and KZ believe that their country will prosper if their country unites in an economic and political alliance with other Central Asian states.

Another goal of the project was to understand the current level of relations between Central Asian countries on a people to people level and learn expert views on this topic.

The set of questions were asked about the current relations of the respondent’s country with the other Central Asian countries.

When asked country specific questions on their attitudes towards each CA country, results are: 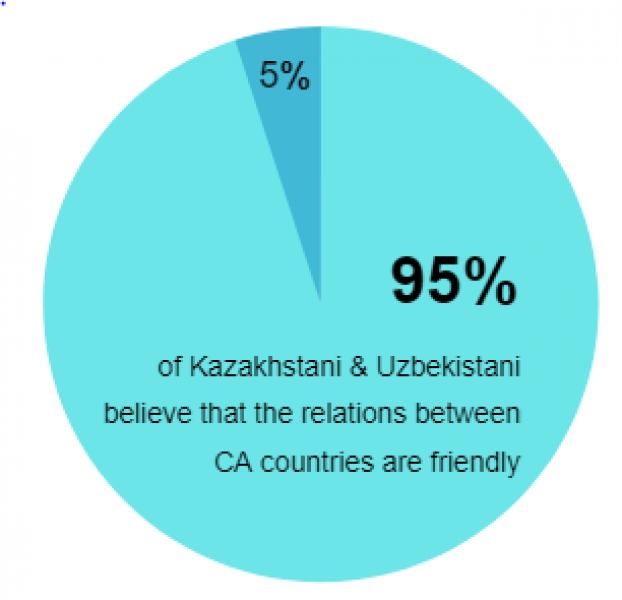 Mostly Kazakhstanis & Uzbekistani shared their positive attitudes, the ones with negative attitudes to their neighbors barely reached 5%.

When asked open-ended questions about the associations caused by these countries, respondents mostly shared equal amounts of both negative and positive associations.

We could get more insights asking respondents to name the most and the least friendly country in CA. 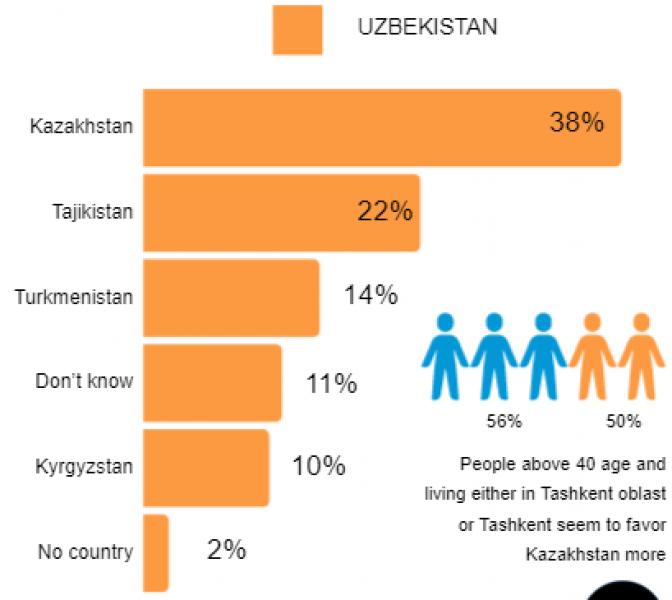 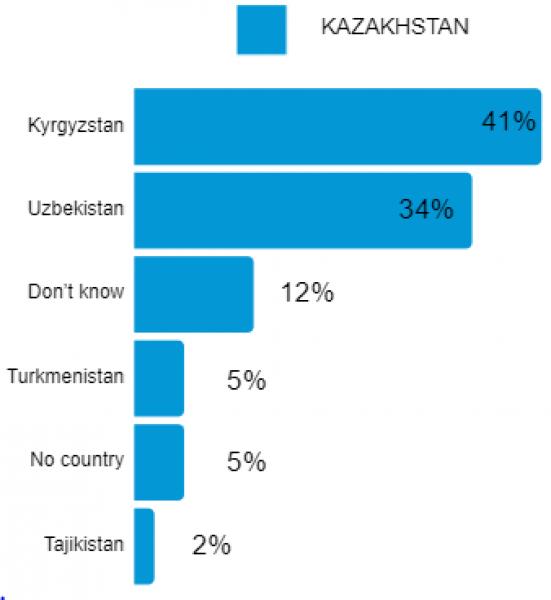 Interestingly, Kazakhstan is the first in Uzbekistan’s rating, while Uzbekistan is the second one, but they have compatible proportions of populations which favor each other. Both populations have vastly different attitudes towards Kyrgyzstan and Tajikistan. 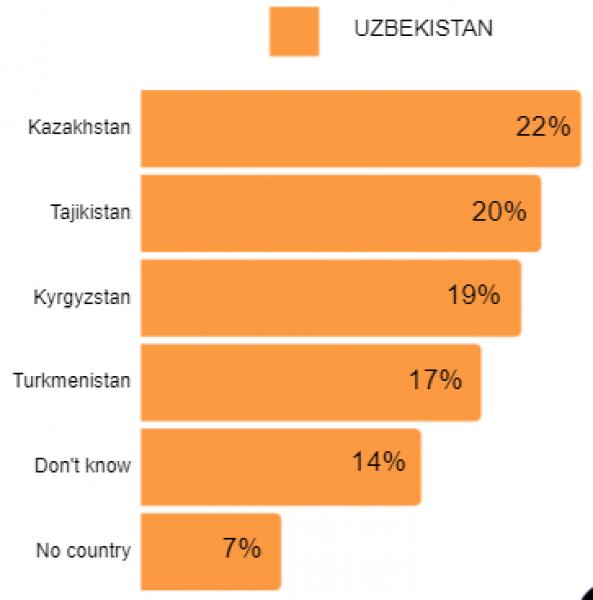 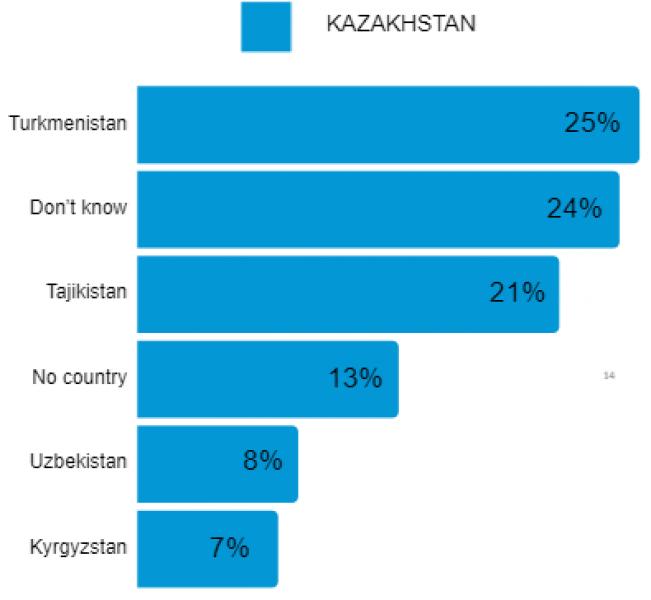 Could you please indicate why we have the least friendly relations with this country?

Respondents named these things to be a reason for the least friendly relations with specific country.

When asked about the barriers for closer regional cooperation people named a wide variety of factors like: 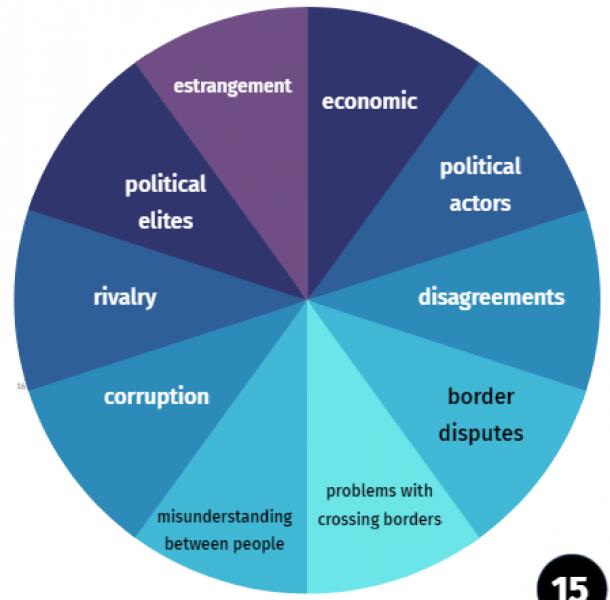 It’s worth noting that Central Asians still heavily rely on outside powers to help solve their problems rather than on their neighbors: 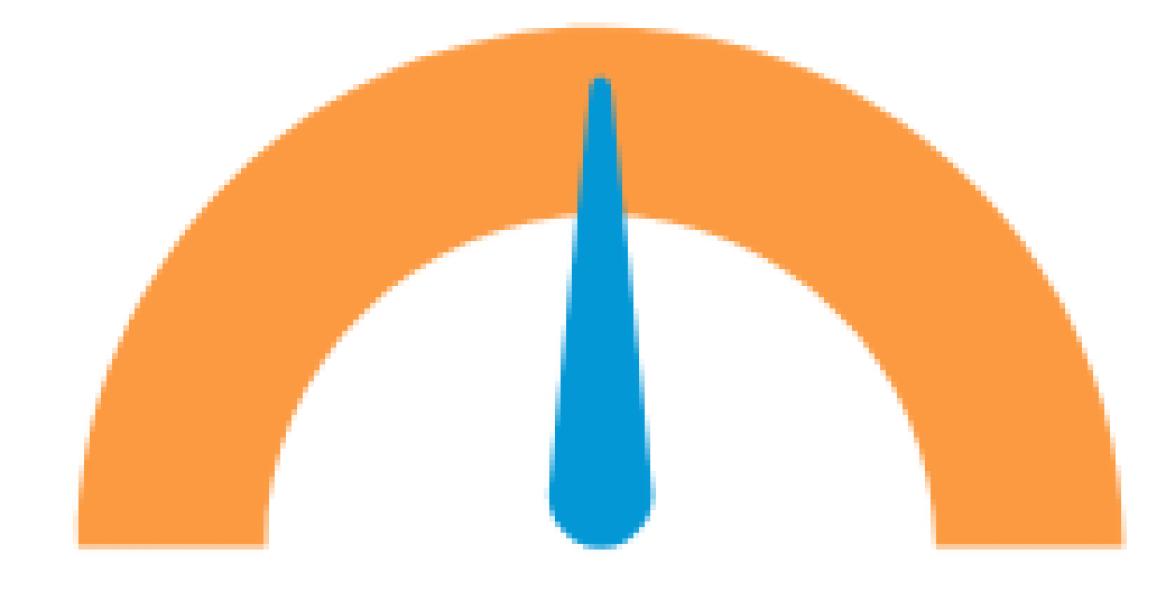 Half of the Kazakh and Uzbek population believe they should turn for help to Russia.

of citizens of Uzbekistan believe that it is necessary to turn to the countries of Central Asian countries.

of citizens of Kazakhstan think that it is better to turn to the European Union.

Low level of awareness about other CA countries

What first thing comes to your mind about this specific country?

In the following, we can see the percentages of "don't know" answers for each country:

Here we can see that Uzbek and Kazakh populations are least informed  of Turkmenistan. But differ in their awareness levels. Ex. Uzbekistanis seem to be more aware of Tajikistan and Turkmenistan, and Kazakhstanis seem to be more aware of Kyrgyzstan. We also can see here that awareness about neighbouring countries is unequal. While asking other questions, we observed that respondents from both countries were more inclined towards the “don’t know” answers when asked about Turkmenistan and Tajikistan than the other three Central Asian countries.

We see the same pattern in the survey data on visits to neighbouring countries.

The share of Kazakh and Uzbek population which never visited following countries:

We can see on this slide that Uzbeks males frequently visit Kazakhstan, Uzbek trips to Kyrgyzstan and Tajikistan are quite the same and the least visited neighboring country for Uzbeks is Turkmenistan. Kazakhstanis  equally rarely visit Tajikistan and Turkmenistan, but their visits to Uzbekistan and Kyrgyzstan are about the same, but also relatively low. 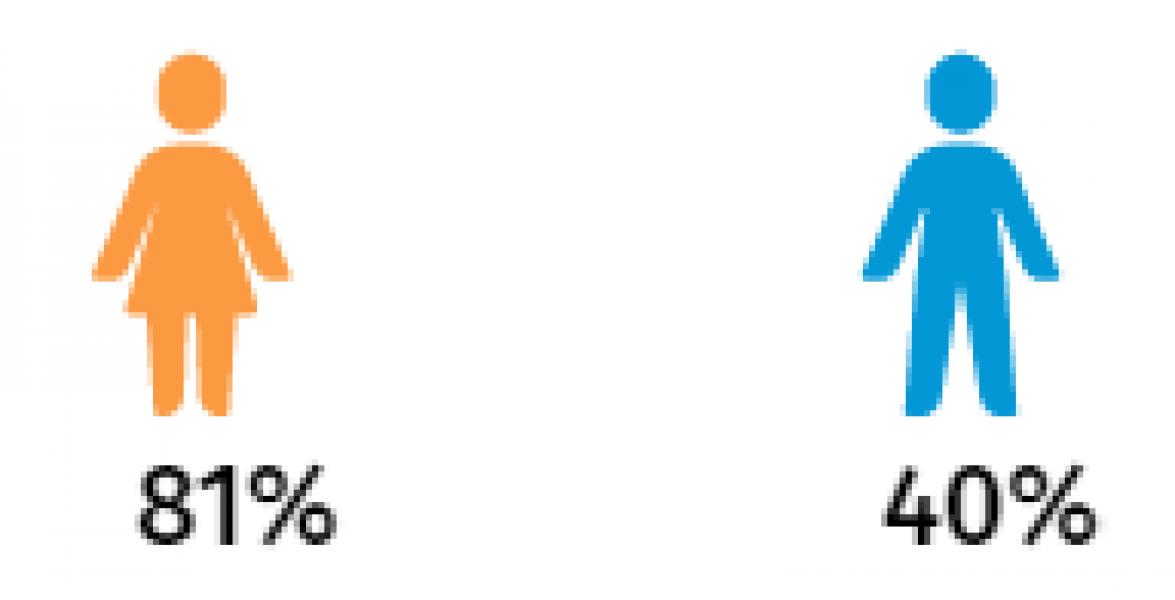 The given data may be a nice illustration of migration patterns in Central Asia as we can see that Uzbek men visit Kazakhstan twice as often as women. Among the reasons for visiting Kyrgyzstan and Kazakhstan, almost half of the residents of Uzbekistan named work purposes. Kazakhstanis visit Kyrgyzstan and Uzbekistan more as tourists.

These were the preliminary data of the first stage of the United Central Asia project.

The data will soon be available on the website and the final report will be also published within November as soon as it gets finalized.

First Phase of the project was sponsored by the Rosa Luxemburg Stiftung with funds from the Federal Ministry for Economic Cooperation and Development of the Federal Republic of Germany. This publication or parts of it can be used by others for free as long as they provide a proper reference to the original publication. The content of the publication is the sole responsibility of the authors and doesn't necessarily reflect the position of RLS.

More via the link to watch the full recording: https://youtu.be/zcSmgMd6In8